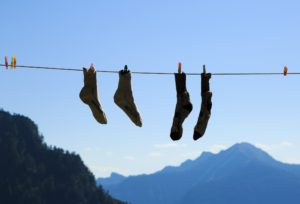 The sock myth; ‘a sock is a sock, is a sock, and there is nothing to be understood’. A few years ago  I  remember approaching someone at a trade show and asking them whether they were interested in attending our annual conference, Innovation for Extremes. ‘I work in socks, so innovation isn’t really my thing.’ I was surprised then and even more surprised after we  explored the design and technology behind socks. We were prompted to develop a sock module for Keeping Dry and Staying Warm because we felt they were often misunderstood and under-estimated. A conversation with my orthotic specialist, who told me how much he would value some specialist sock guidance for clients, convinced us that it was worthwhile. We were able to draw from our core chapters from Keeping Dry and Staying warm and include a discussion of emerging technology to develop this module.

The trio of sock, footwear and foot beds, plus foot care are the critical parts of foot comfort and hill happiness. Socks are a sophisticated and technical part of your layering system, and are produced using high productivity, capital intensive machinery. Specialist outdoor socks, are still mainly produced in Europe/UK/USA, unlike most other garments which are produced in low cost countries in Asia. Additionally, some of these western sock factories are driving sustainability/eco production systems at a fast pace.

So how do socks fit into the wider story of Keeping Dry and Staying Warm?The following diagram shows the themes on which our full socks chapter- socks aren’t that simple after all! 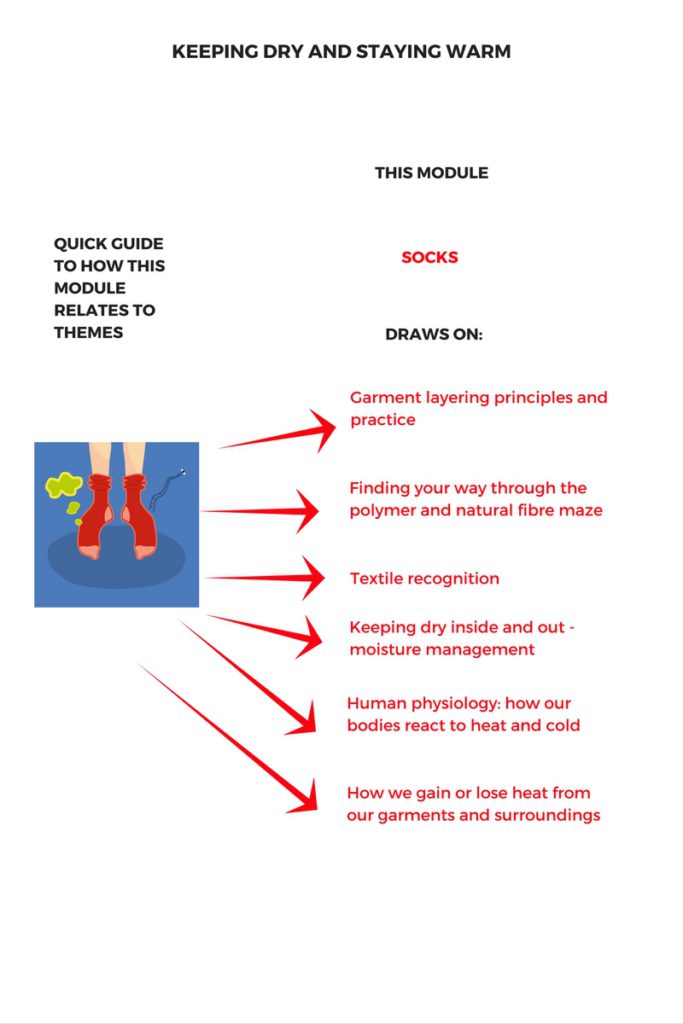 Socks have been around for a long time and have been made with a range of materials. This provides context for Keeping Dry and Staying Warm (to be published in full 2019)  It gives a short history of socks, how they were made and how they insulated our feet.

Socks have been used to insulate feet and legs from the earliest times, when they were made of skins and tied around the ankles with sinews. Matted or felted animal hair was used by the ancient Greeks, while woven socks were found at the Roman site of Vindolanda in northern England dated around AD 100. 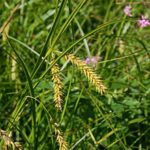 Polar explorers, including Fridtjof Nansen and Ernest Shackleton used sennegrass in their boots in the late nineteenth and early twentieth centuries in addition to socks. SPRI, Scott Polar Research Institute based in Cambridge, UK has much to say on this issue.
The earliest knitted socks, using a single needle, were made in Egypt around 300-500 AD. Knitting with two needles spread from Arabic countries to Europe during the middle ages. By the fourteenth century there are examples of mittens, gloves, stockings and leggings and of peasant knitting using wool. Knitted socks have advantages over those made of woven fabrics, as knits are more elastic and allow easier shaping. 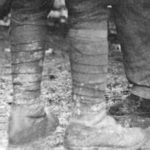 By the 16th century, working people typically wore hand-knitted socks with quite significant regional variations. Machine knitting, largely of silk and cotton, began as early as the 17th century but for warmth, hand-knitted woollen socks remained the norm for working people. Alpine and Himalayan climbers during the 1920s onwards used 2 and sometimes 3 pairs of long woollen socks for insulation purposes and they further insulated their legs with ‘puttees’  which were like woollen bandages wound around the leg. These were they had wide military use until  the Second World War. The precedents of these go back thousands of years, as found in peat bogs. The 12th century Nordic skiers used to wrap their legs with birch bark and they are commemorated in the annual Norwegian ski race, the Birkebeiner ( translated as ‘birch legs’).

100% wool and cotton remained the norm for socks until the polymer and knitting machine revolutions. Not all of these new fibres were used, but the most suitable emerged step by step. Just indeed as one would expect with something on your feet! First nylon (polyamide)was introduced in 1938, followed by polypropylene. Later elastomeric yarns (otherwise known as Spandex (USA), elastane (Europe) or by the trade name Lycra®) enabled a better fit to your feet. 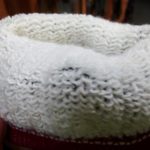 The preferred ‘terry’ loop construction evolved from towels where the loops were designed to absorb water easily. They also added comfort for socks.

Socks today consist of a very carefully thought out combination of up to 5 different fibres, to give the right combination of comfort, abrasion resistance, strength, sweat absorption and yes, smell resistance.

Copyright for this article belongs to Outdoor Gear Coach.

Images are either ours (Module diagram and Terry Loop; Wikipedia copyright free (Sennagrass and Puttees or Dreamstime : dreamstime_m_64768987 and dreamstime_m_56848316)