Lightweight expertise and practice was not confined to mountaineering. Around the same time as Fred Mummery was developing his tent and commissioning down sleeping bags, another lead user pioneer was at work in cycle camping and canoe camping. Thomas Holding combined the skills and expertise of the tailor with enthusiasm for cycling and the freedom it brought him. He founded the Bicycle Touring Club in 1878, the association of Cycle Campers in 1901 and the National Cycle Camping Club in 1906. His equipment design –captured in a catalogue called Refined Camping around 1910- all aimed at improving the pleasure and comfort of his sports. Over a twenty year period he developed and improved designs or worked with suppliers –such as Primus- to develop the lightest and most compact kit possible. His philosophy merged seamlessly with his practice. He was looking for the combination of comfort and self reliance which came with lightness: 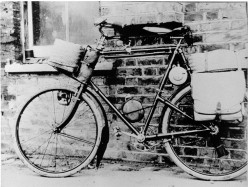 ‘that the lighter the weight and the smaller the bulk, the happier will the canoeist be…if he intends to stay in a hotel or seek shelter in a house, there is small need to take anything but his bacca box and cane; but if he goes in for camping, and therefore for enjoyment and independence, for economy and health and for self reliance – all these things being inseparable from camping – he must necessarily take that which will protect him from inclement weather and keep up temperature during the cold hours of the night’
After years of improvement he achieved his silk Alpine Wigwam Tent weighing just 13 oz which could be carried in his pockets. Alongside bamboo poles, a much adapted Baby Primus, which he worked on with Condrup, the UK suppliers and ‘So-soon’ pans this formed part of his Phantom Kit weighing just 6lbs including food.