We were enormously saddened to hear of Pete Hutchinson’s death. Founder of Mountain Equipment and later PHD, he was one of the most innovative  of his generation with a deep knowledge of climbing and climbers, of down and garment design. Mike Parsons knew Pete throughout his career whereas I only met him in 2000. I was researching Invisible on Everest and Pete was on my interview ‘wish list’. I was lucky enough to spend two hours with him at PHD, his factory in Stalybridge and the interview had an enormous effect on me and on Invisible on Everest. He understood down, garment and sleeping bag design so well and was happy to talk, after gently reminding me that I had forgotten to switch on my tape recorder. One of his observations was that ‘the best gear was invisible’, allowing climbers to get on with the job. The beginnings of a title for our book was born.

The following extract tells the story of some of his innovation and the respect he enjoyed among mountaineers.

Extract from Invisible on Everest : Innovation and the Gear Makers, 2003

Mountain Equipment, which became renowned for its quality down clothing and sleeping bags [was set up in the 1960s]. As British climbing began to catch up with standards on the Continent, climbers may not have cared much about style, but they did care about staying warm and dry. As leading climbers began to travel to the Alps and further afield, they became increasingly aware of what their Continental contemporaries were using to stay warm on precarious bivouacs. Down jackets combined with pied d’éléphants  were widely used in preference to the Zdarsky bivouac bag. After the War Blacks were manufacturing sleeping bags and the Icelandic bag had a good reputation with mountain campers –especially after the early introduction of wall quilting. They were also among the first to move into synthetics ,but the combination of synthetic cover and filling was very bulky and quite unsuitable for mountaineering – it was intended for family camping. But all decent quality down clothing was imported, mainly from the Continent. Pete Hutchinson, the founder of what became Mountain Equipment, remembered being unable to get any decent supplies other than from France for the tiny shop in Manchester, which he had started with fellow climber Pete Crew in 1961. , Pete Hutchinson saw a niche for high quality products..  He began making his own and, after the shop folded, he decided to concentrate on making down gear – first sleeping bags and then jackets. Pete Hutchinson’s Mountain Equipment began in a shack on a farm near Glossop where he lived and worked. Peter Gildersleve [one time catalogue designer for Bob Brigham and Karrimor, later founder of Capricorn Graphics.] remembers visiting Pete in the 1960s, with the outdoor retailer Bob Brigham, :
‘ I got the shock of my life –  I went into a chicken shed and it was full of down and Pete was stuffing duvet jackets… he was a prime mover at the time.’
It was hardly a glamorous existence – he would clean out the cattle sheds to pay his rent and then  go back to his tiny shack and make a jacket. But his down jackets and soon sleeping bags, produced initially on a bespoke basis, developed an enviable and justifiable reputation. Hutchinson was a good mountaineer and his hallmark was a craftsmanship which reflected a deep understanding of the demands placed on climbers at high altitudes and an empathy with his gear. He is one of very few designers to whom climbers have consistently paid tribute for over 40 years. The exceptionally good relationships he built with climbers brought commercial benefits too, for he got the earliest expeditions photographs, which he always used immediately in advertisements or catalogues.  But, in the 1960s, before the expansion of winter climbing , winter walking and backpacking and skiing, there was not a bulk market for his down clothing and sleeping bags in a way that there was for rucksacks. Whilst he certainly would not agree that he was not pleased that Mountain Equipment grew, in some ways, Hutchinson was most comfortable with this position. He loved design work but disliked the rising tide of administration as the firm grew. He returned to his original specialist niche in the 1990s after Mountain Equipment went into receivership. He founded PHD in 1998– Pete Hutchinson Designs – and won a Millennium Design Council Award for his lightweight sleeping bag.

Pete Hutchinson’s down clothing earned their justified reputation partly from Annapurna 1970 and according to Bonington :

‘ The Hutchinson down jackets were so successful that we found we needed only the single jacket either for climbing in or for wearing inside the sleeping bag at night. They had the advantage of being quite close fitting and did not make one feel like the Michelin tyre man.’

Annapurna 1970s was the first of Bonington’s high profile Himalayan expeditions and was followed by others to Everest in 1972 and 1975. But Bonington was not a gear specialist himself and where specialist equipment needed designing Bonington turned to people like Don Whillans in 1970 and who collaborated with the manufacturers

Pete Hutchinson of Mountain Equipment worked closely with Whillans. He found he was one of those designers who had ‘an analytical approach to gear’. Together they developed the first one piece down suit and wind suits.  He has vivid memories of dealing with Don on designs for Annapurna 1970 and other expeditions. He had strong and highly practical views on clothing for high altitude climbing putting functionality above all else. He believed that:

‘ once you get into the higher reaches of a peak, you don’t want to  bother about your gear really, you just want to be warm and protected and get on with it You don’t want to think about changing things and all the rest of it. ’

This was exactly the kind of approach Pete understood and, as they both knew what they were talking about, the design process was a genuine interaction until the garments were right . Hutchinson went for one piece down suits for the Annapurna expedition based on ideas evolved with Don Whillans in the 1960s. They were a novel idea for climbing at that time , though of course there were one piece work overalls and flying suits. The main problem was nothing to do with textiles or the quality of down, but all to do with arranging the zips to make  ‘going to the toilet’ easy. It was crucial not just because of the potential for messy accidents, but because :

‘just ordinary practical things like this are so important when you are up there because all you want to do is plod on and get up this thing and they say the best gear is invisible. …we chose the one piece wind suits, which once they put them on, sort of round Camp Four or something, they just keep them on all the way, and as long as you can go to the toilet in them and so on there is no reason why you should take them off. [They were so successful] that we went the next step [for later expeditions] following that into down suits. Again the same idea really, once you got into it you sleep in it, you just live in it, and then you don’t have to think about putting gear on and off, and all the rest of it.’ What Hutchinson really appreciated was the feedback he gained from climbers :

‘ I like to hear that the gear is good but the useful information for me is when the climbers come back and say, ‘It would work a lot better if …’.

Reading the obituaries that have appeared this week it is striking that generations of top mountaineers have, over 50 years, benefitted from his careful design. 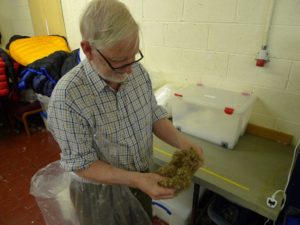 They stretch  from Chris Bonington, Don Whillans and Doug Scott in the 1960s and 1970s through to Andy Kirkpatrick today. The climbing world would have been a different and much less safe place without him. He hated managing a large business but design returning to his roots with PHD. Good innovators appreciate how past experience and knowledge can inform and shape  future innovation and that was true with PHD. In 2014 they revived Pierre Allain’s bivouac system. I feel privileged to have met him and sad that the outdoor industry has lost such a craftsman of note.