Before he became a mountain guide, John was working in Chamonix, at Ensa, the ‘Ecole Nationale de Ski et Alpinism’ sometime in the 60s. Also present was a very experienced Swiss guide, Martin Epp.  A discussion arose about the skills, finesse, and strength needed for cutting ice steps. Martin suddenly commented that the ‘English are no good at step cutting’. John then challenged him to a race, insisting the resulting steps were measured and assessed for suitability of use by an average client.

1960 was a decade before front pointing and curved picks, and British climbers were still perceived as clients with lesser skills.

Martin then asked why he was grinning. ‘Because I am a blacksmith’, John replied.

Of the many skills that John mastered throughout his life, his hands and fingers remained the hands of a master blacksmith. His mentality, too, was steeled by the perfectionism drummed into him by his apprenticeship in Sheffield. 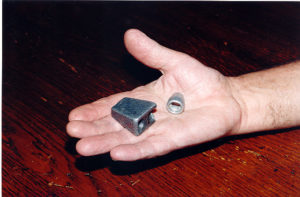 John Brailsford holding an acorn (right) and a MOAC (left)

John was typical of the new English post-war breed of working-class/tradesmen climbers, alongside Brown, Whillans and many others.  He was an orphan from Sheffield and, after making an acquaintance with the outdoors as a scout (and later through Outward Bound), was apprenticed to a Sheffield steel company, where it was more than the steels that became tempered and hardened. He remembered a hard lesson vividly:

‘As an apprentice, I was given the job of forging twelve pairs of tongs for the foundry. Tongs were used to lift hot metal moulds apart after completion of casting. They were paid at the rate of two shillings and sixpence per pair in 1953, about twelve and a half pence in current cash. I was given an assistant of some 59 years, and it was my responsibility to pay him. I  received eight shillings for every £1 that I earned, and as an apprentice I was  allowed to book thirty shillings per day. Thus, twelve pairs of tongs equalled one day’s pay. We started early, 7.30 a.m. prompt, Ellis prodded the hammer driver into action and Ellis and I got stuck in. Finally, 12 pairs of tongs lay by my anvil, and I cycled home and then went to night school.

At 7.15 a.m. the next day, I clocked on and went to my hearth, where Ellis already had the fire going and had made my tea. Such was the craft structure in those days. I then noticed a neat pile of short lengths of steel by the anvil. F***!  The short bits had been 12 pairs of tongs.  I sat down with my tea, fuming mad but helpless. 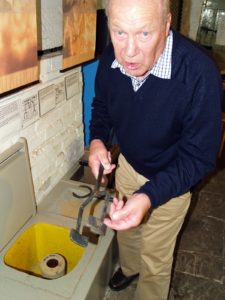 George Henry Ratcliffe, the foreman smith, had done this to teach me a lesson that I could do better. George Henry knew my background as an orphan; my aunt lived next door to him in Ecclesfield. He made me an offer I couldn’t refuse. I could remake the tongs to the best of my ability and Noble’s satisfaction. He would sanction my payment and let the previous day’s pay stand if they were perfect. I made my tongs, my pay and regained my self-respect.’

These and many similar experiences made him the stern but fair taskmaster he became to around 3,000 students, first at the secondary school in Derby, followed by Loughborough University and lastly as the head of outdoor education at Bangor.

John was an accomplished bike rider (almost turning professional at one point and acted as coach for some welsh teams). He encouraged his students to bike ride to the alps for the annual student climbing trip. He supported his students to make their own gear as course projects.

He became the training officer for the British mountain guides, where arguably, the concept of an apprenticeship in the training of a guide still has much to be commended. John had a vision in 1973 that the British Mountain Guides ( then still BMC accredited) could be alpine guides to the same standard as alpine based guides. His background as a blacksmith proved important to the final negotiations because he shared the craft background of so many guides in the Alps. John, as the French speaker, led the many negotiations supported by Peter Boardman, then National officer of the BMC.  The final acceptance of the British guides into the UIAGM ( now IFMG) in 1977 was an important landmark, the first lowland country to be accepted into this body which is now worldwide. He pursued this vision by setting up training courses for the British guides at Loch Eil centre, where Col Dicky Grant gave him free use of the centre and Alan Kimber to support.

British climbing practise eschewed the Alpine practice of permanent peg placements as not ‘fair play’. Natural protection was used where possible and the removable ‘nut’ concept instead of the piton came from the British practice of threading the rope around a small rock that was naturally jammed in a crack. Ingenuity followed and climbers carried small rocks.  An engineering nut soon became a rather better alternative. It was John who created the first purpose designed and manufactured version of the nut. He was still teaching craft at Allestree Woodlands Secondary School, Derbyshire, when in 1961, he made ‘The Acorn’ the first manufactured nut, which he turned on a lathe. He sold this prototype to Roger Turner Mountain Sports in Nottingham. The following year, He improved it considerably in the following year to fit and hold better in cracks. A completely different process, aluminium die-casting, was needed to produce a double wedge shape, but the minimum quantities required made Roger Turner hesitate. John, therefore, approached another mountain retailer, Bob Brigham had teamed up with a British mountain instructor called Peter Gentil. Peter had left J.E.B. Wright’s ‘Mountaineering Association’ to set up a joint operation with Bob, offering MOuntaineering ACtivities ( hence MOAC). The first batch of  2,000 was sand cast, but the second batch was die-cast, still from John’s patterns. Today many older climbers still keep a MOAC nut on their harness. The story of the nut is here in a short original video of many years ago.

The innovation of the nut was, in essence, the foundation stone of the UK climbing hardware industry. It was also the springboard to higher British climbing standards, perhaps second to no other nation by the early 1980s.

John went on to become the supporting master craftsman for several other manufacturers. He made all the prototypes for Denny Moorhouse, the `CLOG founder who later became DMM and then for Mo Antoine at Snowden Mouldings. He designed and hand-forged the original Curver ice axe prototypes and followed through the quality control of the axe head which was forged at Stubai, Austria. For many climbers the ‘Curver’ was a longtime favourite tool. Many individual climbers in the early Seventies who urgently needed a new axe with a curved pick willingly paid him 4/6d (0.24p) to have their old one altered and re-tempered by John.

John was the author of many instructional books and several alpine guide book for the Alpine Club of which he was a long standing member. The made the decision to move to his favourite area of the alps, the Ecrins after the impact of Thatcherism on education. He made one last visit back to Sheffield, spending 4 days explaining steel making processes and the history,see pictures.

John is survived by his family, Andrew, Elaine and Sir David and wife Evelyne.