The pioneer Alpine (and Himalayan) lightweighter was Fred Mummery, arguably the greatest climber of his generation. With a close set of climbing friends, he enthusiastically pursued guideless climbing in the Alps in the 1890s. 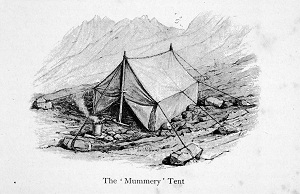 Mummery Tent with axe as pole

became a mountaineering classic and, in contrast was light and by 1892 he was having it made of silk –weighing a mere 1.5-2lbs. BUT even with this tiny fragile tent he and his companions still relied on Porters to carry :

Food (unspecified) but may well have included champagne!

No question though that Mummery had a lightweight philosophy which he transferred to the Himalayas for his fated Nanga Parbat expedition in 1895. Where Whymper preferred large scale expeditions with meticulous planning Mummery preferred the spontaneity of the ‘back of the envelope’ approach. He was entirely unconventional. In an age of chaperones, he broke all the rules by spending nights in his tent, not just with his two friends Ellis Carr and Cecil Slingsby, but alone with Lily Bristow, the most outstanding female climber of her generation.

Enthusiasm for guideless climbing and for a lightweight approach was shared by Tom Longstaff, another lead user innovator ,who took Mummery’s thinking several steps forward. This likeable enthusiast for independent climbing used silk not just for his tent but also his ropes. Some used silk ropes which , at 35 Swiss francs a kilo compared with 9 francs for a 30 meter long manila rope, were very light but very expensive. As a devotee of silk ropes Tom Longstaff was probably the first mountaineer to derive cachet from high performance gear. He cheerfully remarked in 1903:

‘A silk rope is useful in many ways to the guideless climber. For instance it will obtain civility from haughty hotel-servants , and even guides themselves may be beguiled into conversation by its means ; if they will ask its price the owner’s respectability is at once established, and he is put down as mad, and not merely a mean person.’

Longstaff’s experience of lightweight techniques, of high altitude climbing and indeed the Arctic undoubtedly shaped the clothing and equipment used on Everest in the 1920s. He was a member of the 1922 team and was joined on Spitzbergen by Sandy Irvine in 1923.

Climbers who favoured a lightweight approach in the mountains included Philip Hope and W.T Kirkpatrick. Like most of their contemporaries they were happy to rely on porters as far as the hut. Over a number of years, before the First World War,  they reduced the weight of their loads and ensured clothing was light layers of wool and silk that trapped air for improved insulation.

Of Philip Hope it was said:

‘Hope the resourceful reduced mountain outfit to an exact science- he goes very lightly burdened yet can prepare buttered eggs and cocoa on the remotest mountain peak….

Hope was extraordinarily ingenious in inventing and perfected all sorts of devices in the matter of equipment. He devised s loofah cushion, in 2 halves, connected by string. When folded it hangs between the rucksack and ones back, and when opened out with a bit of baptiste spread underneath, it enables one to sit on damp ground or snow with impunity…. His latest rucksack is made of airship fabric, very strong and quite waterproof and weighing 7 oz complete’