A French mountaineer, alpiniste and rock climber born in Paris 1904 who arguably was one of the greatest climbing product innovators of all time, reaching across technical climbing hardware and performance clothing. The author of the Wikipedia note on him says he is mainly remembered for his climb in Fontainebleau, ‘Angle Allain’. This article corrects that understatement and gives a full account of the depth and breadth of his innovations.

‘If nowadays the name of Pierre Allain no longer resonates as a benchmark for the new generation of climbers, it should be remembered that even the least well equipped have a minimum of three climbing tools/articles of which PA is the creator; the aluminium Karabiner, the abseil device, rock boots, not to mention the down jacket and cagoule. For these, we mountaineers should be forever thankful’.

The term ‘PA’s’ became the generic expression used by all Brits for their rock boots during the 60’s.

The 1930s  was the most serious, boldest and most highly publicised climbing decade and it has probably never been equalled. We describe this in Invisible on Everest as Phase 2: The ‘Bare Knuckle Fight’ lasting from the mid 1930s to the mid 1950s. The climbing techniques existed but not the clothing and bivouac gear. The rapid acceleration of techniques following Dulfer and friends (pre-First World War) and Welzenbach (known as the father of modern Alpinism) created the system we all use today of double ropes and karabiners . This meant that the ‘last great problems’ were achieved before warm and waterproof garments and bivouac gear had been developed to match the conditions. This alone, underlined the seriousness of the climbs. The fanfare that surrounded the so-called ‘last great problems’, the Eiger North Face, Grande Jorasses, Cima Grande, was clouded by political overtones which often obscured the achievements.

In contrast to the rapid uptake of the new German technical climbing methods across the Alpine nations, the diffusion of innovations in clothing and bivouac equipment was very slow. Ideas did not move quickly across national boundaries in this period and British and French clothing ideas did not reach Germany. Down clothing appears to have been unknown among German climbers even though experiments began in Britain in the 1920s with George Finch on the 1922 Everest expedition ( see story in Invisible on Everest chapter 7).

Pierre Allain (PA) began to think about new bivouac equipment , in 1931, after a very hard night in a crevasse on “La Dent Parachée” (Vanoise) with Robert Latour.

PA’s newly created down jacket was used in conjunction with a short length sleeping bag (which he referred to as a ‘pied d’éléphant’ or elephant’s foot).This is a short waist length sleeping bag  and was a classic design for lightweight bivouacs. It was a total bivouac concept, including a knee length, coated silk jacket, which he called in French ‘an awning’. This design of jacket, known by the French word cagoule, dominated the UK market during from the mid 60’s through to the end of 70’s. 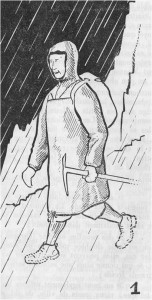 The influence still lingers today, amazingly, as British outdoor people still like the longer jacket, partly because it can obviate use of waterproof over-trousers.

In case of an unplanned bivouac and no down equipment, the long cagoule could be pulled down over the knees and feet when in a crouch position. When used in a full length sleeping position, a half length inflatable mattress of rubber coated silk provided comfort and insulation from cold rising from the ground. In order to achieve a very light, but durable product PA imported from Japan some ultra-lightweight silk. This comprised two layers of silk which was cleverly cross laid “on the bias” to create a very high tear strength and the rubber coating between the two layers made it not only totally waterproof but also air holding. From this fabric he made his short inflatable mattress weighing only 400g and of course his first ‘cagoule’.

After his first trials on a first ascent of the South Face of the Fou he wrote in Alpinisme et Compétition, in the chapter “L’Arête Sud du Fou”,

A literal translation ‘Here, we are totally equipped. The bivouac has become bourgeois, the risk has become security. The Bohemia makes way to the Organization.’ The way we would express this today is; We are now totally equipped; bivouacs are now a luxurious and secure thing to do because instead of ‘ad hoc methods we can be fully prepared.

His equipment was used in the 1936 French Himalayan Expedition and described as the ‘Integral Bivouac’. However, he was rather premature and his equipment was not commercialised in the French market until after 1945 and unknown in Germany until 1955. Then it was directly imported by Schuster of Munich.

After his 1933 ascent of the South Arête of the Fou, Pierre Allain then went on to create 12 premières, beginning with 1934 West ridge of the Pic san Nom, South Face of the Meije, South Face of the Corno Stella, 1935 East Face of Caïman.

The French succeeded in climbing the first 8000er, Annapurna, in 1950.The great achievement of this trip was to find the route to the base of the mountain, without prior exploration. Maurice Herzog‘s team did not include Pierre Allain. However in a rather uncomfortable pre-summit bivouac (the precursor of two desperate post summit bivouacs where they were badly frostbitten) he was able to muse ‘good old Pierre: these (sleeping) bags are superb!’

But just what sort of man was Pierre Allain?

Herman Huber had met him through business as Salewa was, in the late 1960s, already exporting considerable quantities of aluminium ski poles to France. A visit to Munich was arranged for the French retailers and amongst this group was Pierre Allain. A rapport was quickly established between these two mountaineers. Herman rated him perhaps above all other innovators saying, that if he ever had his time over again and had to choose an innovation collaborator it would be PA. But it is Stephane Pennequin, the passionate climbing historian who had the memorable experience of meeting him in his fully operational workshop before he died. 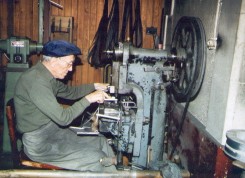 ‘Do you believe in Father Christmas? I certainly do! I met him in September 1992 in his workshop somewhere near Grenoble. With a secret smile he switched on each one of his four machines right in front of my astonished eyes and superb tools began to appear; the sort of tools that alpinists use in their never-ending quest for the summits.

And his real name? My Father Christmas is Pierre Allain.

If Isaac Newton or Kingdom Brunel should ever meet him one day they would no doubt have a real lesson from the Maestro concerning these machines.

Today these are real treasures of alpine industrial heritage, brainstormed, designed and assembled piece by piece, 40 years ago by Pierre Allain himself.

These machines, under the sole control of Pierre Allain, the maestro of ingenuity and minutiae, produced karabiners in 22 operations and three minutes, with a capacity of 30,000 karabiners per annum. To occupy himself in a retirement of little prosperity, Pierre Allain had founded his tiny enterprise in the cellar of his house, in Uriage, in 1963. The organisation could be assured of all functions, from chief engineer to sweeper-up, as well as secretarial support; from PA himself. In addition to being the formidable climber which one knows him to be, this leading light of the rock world certainly illuminated the conservative world of climbing equipment’ 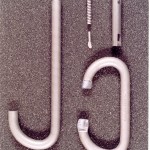 But, like most inventors not all of his developments were commercially successful. Certainly his aluminium lightweight karabiner was taken up very quickly, but this was not true of his descendeur.

After a first prototype in 1947, in the form of a cross, Pierre Allain launched the Trident on the market several years later. It encountered a certain reticence amongst the traditionalists who because of the risk in the ‘T’ versions of becoming detached from the rope preferred to continue to ‘burn’ their clothes using the traditional abseil method. The later ( lowest in picture) version has a fully captive rope and this became fully accepted and indeed much copied.

An early demonstration of his new device was given by PA at Montenvers, sometime between 1943 and 1945, and he was accosted by the arch opponent of innovation and the head guide, Armand Charlet with the question: 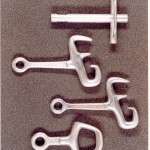 “What is that gadget you have there”?”It’s a descendeur” PA replied

“A descendeur? A rappel is something which one does with the legs or one doesn’t do it at all”!

But the tool which remained the most controversial was his ‘décrocheur’, a simple mechanism which allowed an abseil descent using only one rope. Once the weight of the abseiler was taken off the rope, this gadget unhooked itself automatically, the whole then dropping together. Climbers are well accustomed to living alongside calculated risk but they never accepted this concept which had the feeling of descending with the Sword of Damocles close to one’s neck! However, having used his descendeur some dozens of times, Pierre Allain was the proof of its security for him but not the climbing fraternity. 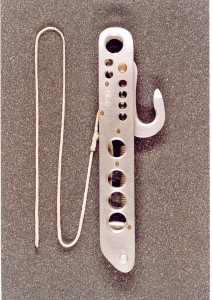 Driving his research ever further, PA conceived and tested in the field an even more astounding piece of apparatus. A gadget linked with the décrocheur this took the form of a ploughshare which enabled one to abseil from snow. “

(NB This was the forerunner of the ‘deadman’ of the 70’s, created for Scottish conditions.)

But finally what he is most recognised for was his his rock boots. PA’s was the generic name we all used for our rock boots during the 60’s and even into the early 70’s. These boots were made in Paris by a small boot maker called Eduard Bourdeneau. Tony Lack of Pindisports told me he visited once but alas no pictures. This was the source of EB’s (and not Ellis Brigham as many assumed) although Brigham later introduced his own version FEB’s which were made initially at least by that well known footwear maker Joe Foster who is the founder of Reebok.

Sources: Mike Parsons and Mary Rose, Invisible on Everest: Innovation and the Gear Makers (2003) and other unpublished sources.