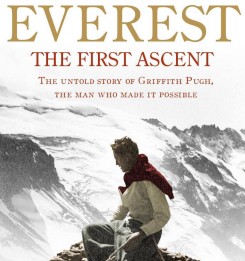 Everest: the First Ascent is an exceptional book, which should be read by anyone interested in mountaineering history and how science contributed to climbers’ improved performance. Before Harriet Tuckey’s engaging, informative and intriguing book, Griffith Pugh was little more than an obscure footnote in mountaineering history. A qualified doctor, Pugh  served in the Royal Medical Corps in Lebanon during the war, becoming an expert in mountain survival. A keen and skilful sportsman with passions for climbing, sailing and skiing, he was selected for the 1936 Olympics, though injury prevented him from competing. His physiological and scientific research made the difference between success and failure to the 1953 Everest expedition. He inspired a generation of scientists to extend his work and his legacy to all involved in outdoors activities, especially mountaineering and cycling is enormous.

When we wrote Invisible on Everest and the equipment overview for the Mountain Heritage Trust exhibition, at Rheged in 2002, we concluded that Everest 1953 did not succeed because of a better mountaineering team than the Swiss. The Swiss had, after all made two attempts in 1952 and their team included professional mountaineers. Instead, we showed that success came from a combination of oxygen equipment, hydration, nutrition and logistics. The key to getting enough fuel, food and oxygen in place could only have been achieved by logistic skills. This involved an approach to mountain climbing that ran against the grain of prevailing expedition attitudes. When the joint Himalayan Committee of Alpine Club of the Royal Geographical Society dropped Shipton as leader, in exchange for Hunt, there was a furore, but it was crucial to the successful outcome. John Hunt was a soldier who had served with General Montgomery in Italy and was the logistics mastermind of the expedition. The popular view was that Everest was climbed on sheer guts, heroism in a society where being seen to be preparing or doing physical training was not ‘playing the game’. These attitudes and the amateurism they convey also masked Pugh’s contribution. What this book reveals, through its vivid account and painstaking research, is the ‘invisible hand’ of Pugh’s scientific knowledge in all matters to do with equipping the expedition, its nutrition, food packaging, hydration, acclimatization and use of oxygen. He was undoubtedly the unsung hero and deserves considerable credit for the expedition’s success.

The shambles of the 1952 Cho Oyu expedition contrasted with the professionalism of the Swiss expedition of the same year. Although failing to summit, the Swiss set a new altitude record on Everest. Pugh’s report, The Pre monsoon British Himalayan Expedition to Cho Oyu, 1952, was of vital importance to the preparation for Everest 1953. The research also sufficiently impressed the Swiss for them to exchange this for their 1952 records on diet, equipment and the personal diaries of climbers. It is worth remembering, that the Swiss still had another summit chance in the post monsoon season. The combination of Pugh’s scientific knowledge, informed as it was by the Swiss experience, dramatically increased the chances of success of the 1953 Mount Everest Expedition.

Official accounts at the time (and since) obscured Pugh’s remarkable scientific contribution to the first ascent of Mount Everest. Much of what has influenced our understanding of mountaineering physiology at high altitude can be tracked to his work. This includes the importance of acclimatisation to reduce illness and fatigue, the use of oxygen and oxygen systems and the understanding of hydration and diet. He combined this with well informed practical knowledge of equipment design which extended to stoves, clothing and footwear.

Griffith Pugh can best be described as a ‘lead user’ innovator, whose practical and scientific approach was of fundamental importance to the success of Everest 1953. Lead user innovators innovate to improve their performance rather than to commercialise.  Pugh, like many scientists, was used to developing and adapting equipment to carry out his experiments. His experience training soldiers for mountain warfare in Lebanon ( when the allies thought the next phase of WW2 was fighting northwards through the fringes of Europe and into Bavaria) were ideal preparation for his Everest role. This and his  experience as a scientist informed his approach to clothing, equipment and physiological testing for Everest 1953. He loved to test and to adjust equipment until it fully met his needs and those of the expedition.

All his choices combined science and experience. He knew, for example, that the Swiss used Meta fuel stoves and were able to drink only 1-2 pints per day. This contributed to Pugh’s regime of 6-8 pints per day, produced using customised Primus stoves to operate over 25,000ft and with logistics to get all the fuel in place. The stoves also had a special adaptation to conserve fuel by focusing heat at the base and up the sides – See video clip below (0.46 seconds in). This is a design technique borrowed from Polar explorers, who developed  it, even before Nansen used it to good effect in his 1888 crossing of Greenland. This design feature has only just emerged for general consumer stoves in the last 10 years.

The high altitude boot made by SATRA (Shoe and Allied Trade Research Association) was largely Pugh’s design. An example of this boot survived, belonging to George Band, and we were able to examine it thoroughly when it was displayed at Rheged for the Mountain Heritage Trust Exhibition. The design was based partly on the Swiss reindeer skin boots used in 1952 made by Bally, and partly on the long British polar history of use of ‘Finnesko’ footwear and the super lightweight 1924 Mallory boots based on George Finch’s design(which we also examined). In 1953, closed-cell foam (first used on the Karrimat in 1968 and now used on all mountain and ski boots.) did not exist and the 1930’s German expeditions used double boots with felt lining which were very heavy indeed.

The boot included Kapok seeds for the insulation, used in this period for cheap sleeping bags. Although the kapok seed is resistant to water, the problem was dealing with sweat from the user’s feet and ingress of snow-melt into the thin leathers. This was solved by an inner ‘vapour barrier’, (an idea only emerging for sleeping bags for Polar use in the 70’s) and micro cellular mesh insoles ( to avoid sox becoming sweat soaked) and an integrated rubber gaiter on the outside. ( a precursor to the integrated gaiter cold weather boot designs emerging only in the 1990’s.) The ‘lasting’ process would normally crush kapok or other soft insulating materials but SATRA used a special lasting method. The rubber Vibram sole, only just emerging in the post war period, was not accepted as it was but a lighter weight microporous rubber was specially developed.

The modern attitude was that these boots needed to be used only for the higher altitudes and did not need to to last very long. As it was they were so comfortable and warm they were used too soon and at lower altitudes. The SATRA boot was never commercialised. Had it been so it would have been the world leading boot for 25 years  until the development of plastic shell/closed cell foam Koflach boots in 1978. Typically of course scientists are not natural commercialisers and Pugh was no exception. In any event, there was yet no real outdoor market in the UK, let alone one for high altitude boots. This boot was a product ahead of its time, a lead user innovation which was not adopted more widely.

Pugh’s influence on sport extends well beyond high altitude mountaineering. A legacy from Everest 1953 was the development of the Duke of Edinburgh’s Award and local authority outdoor centres, leading to a dramatic rise in outdoor activity. A series of fatalities led Pugh to investigate the causes and to propose better survival techniques and equipment. This research led to the recommendation of orange survival bags as standard practice and to the innovation of the KISU (Karrimor Instructor Survival Unit) by Ken Ledward in the 1970s.  Pugh’s physiological research also extended to swimming, cycling and ageing.

This book gives vivid and very human insight into a difficult, but very talented, practical scientist. Pugh was personally impatient, though intellectually methodical and extremely practical. Like many driven, self reliant, self absorbed men he was hard to live with. What I especially like about this book is the engaging narrative from which we learn so much about mountaineering and how the mountaineering establishment functioned and about the people involved. The book is set against the complex politics of British mountaineering in the 1950s. As an innovator in Everest expeditions Pugh has much in common with George Finch. He was a scientist, outspoken and an outsider, whose contribution was not readily acknowledged in an often inward-focused group of mountaineers. Mountaineers in this period were late adopters, as illustrated by their suspicion of Continental technical climbing and mountain practices, as well as science. They saw Pugh as an inter-loper, although he was an Olympic standard skier and mountaineer. He was regularly seen as a boffin, whose physiological tests interfered with the rhythm of an expedition and whose enthusiasm for emerging technology was baffling.

Yet as leading post-war mountaineers have attested, this book is a ‘riveting read’ and an important addition to the history of Everest. It has inspired us to develop further blogs demonstrating Griffith Pugh’s lasting contribution to outdoor activity. These will explore areas such as the impact and diffusion of his ideas on the understanding of hydration, diet and nutrition and the influence of Everest 1953 on British society . This book illustrates that innovation is not a simple linear process which occurs simply as a result of scientific discovery. Acceptance of novel ideas, however well founded, depends on changing attitudes and practice. But that takes time, mountaineers like most people are creatures of habit. So no wonder Griffith Pugh was so often frustrated.