You are what you Wear

There is always one

Outdoor gear is functional by definition, but what does what you choose to wear on the hill say about you? Clothing choices are about more than keeping dry and staying warm, because clothes reflect where you belong or how you want to be perceived by your peers or by wider society.

Mary “I remember as a child going to a birthday party in the early 1960s in trousers because I thought it was going to involve playing in the garden. Everyone else arrived in party frocks and I felt a complete outsider”.

Clothes for Climbing and Expeditions in the Past

Attitudes to dress, status and respectability were far more rigid in 19th century England than today and it had implications for clothing for the early Polar expeditions. Function became eclipsed by appearances and Naval officers were reluctant to deviate from strict dress codes. They were also reluctant to learn or admit they learned from Polar indigenous peoples, and where they used Inuit sealskin jackets boots and gloves and animal skins, as they increasingly did they disguised their reliance on it, always appearing for inspections in full Naval dress.

Nineteenth century women climbers were even more concerned about social respectability and how they looked, though things were not quite what they seemed. . It was a world where women climbers (certainly English women), if they were illustrated at all in the earliest days, were shown in crinolines, graduating gently through long skirts to the knee length ‘frill’ in the years before the First World War. The public impression of women climbers was of a gentility and comparative elegance, which was not too far removed from conventional views of Victorian dress and behaviour. After all dress was cultural shorthand for class and status, conveying the wearer’s position in society.

Early women climbers and certainly their families transferred English value systems, as symbolised by clothing, to the Alps. It was an image that was quite at odds with climbing to a high standard and yet this was precisely what a minority of women did, their achievements obscured by a cloak ( or maybe a skirt) of respectability. Comparing the public and private worlds of the top female mountaineer, before the First World War, reveals a complex charade where they only appeared to follow dress codes whilst privately flouting them along with many other conventions – as soon as they were out of the valley. As Lizzie Le Blond, the Victorian climber remembered in 1932 :

‘Dress in those days was not such a problem as it might be supposed, for except that one wore a skirt over one’s knickerbockers, the costume when this badge of respectability was removed did not differ greatly from that usually worn today.’  Mrs Le Blond, ‘Then and Now’ Alpine Journal 1932.

But sometimes efforts to maintain the charade of respectability took on the character of a French farce, as when Lizzie le Blond lost her skirt after a long day. She vividly recalled:

‘ I had an awkward experience connected with climbing dress .. having left my skirt on top of a rock with a heavy stone to keep it in place, a big avalanche gaily whisked it away before our very eyes, as we descended that afternoon. Unwilling to venture across the couloir so late under the hot sun in search of it, I came down just as I was till close to the village where I remained concealed behind a clump of trees while Imboden fetched a skirt from my room at the hotel. I had carefully explained to him exactly where he would find a suitable one, but to my horror, he appeared after a long interval with my best evening dress over his arm ! There was nothing for it but to slink in when he gave the word that all was clear, and dash up to my room hoping I should meet no one on the stairs.’ Mrs Le Blond, ‘Then and Now’ Alpine Journal 1932.

Rebelling against parental norms transformed what teenagers in Western Europe and the United States wore from the 1960s onwards. After the Second World War ‘scruffiness’ was a crucial way to fit into an emerging climbing community whose values and norms could not be more different from the majority of pre war and nineteenth century climbers and explorers. 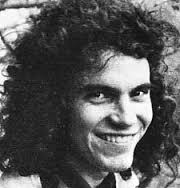 Alex McIntyre (see left from Mountain Heritage Trust collection) in the late 1970s was the epitome  of climbing scruffiness in his pile gear and torn breeches. But,by the early 1980s he was starting to challenge himself and others and comment that scruffiness and torn gear was not only inefficient but in some cases dangerous. This was the beginning of the shift in safety and performance logic, plus the next generation of clothing layers.  Fleece changed the whole nature or outdoor clothing business. In fact some people when first presented with fleece said, that’s too good for climbing, we will use it for work or leisure until it’s a bit more ragged!

When we traced the history of the waterproof jacket we showed the shifts in styles, materials and function through time. In our new book Keeping Dry and Staying Warm we highlight how 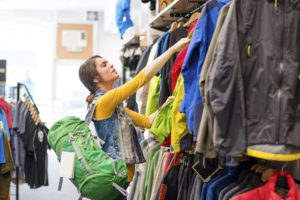 different sporting tribes use garments which enhance their performance and much more.

(Women’s dress is an extract from our book, Mike Parsons and Mary Rose, Invisible on Everest: Innovation and the Gear Makers (2003)

[Images from Cartoon Stock – ‘You always get one’ Roy Nixon, ID min 570