What 10 lightweight breakthroughs really made a difference? Lightweight is a state of mind, rather than a description of individual pieces of kit. Going lightweight is about taking less than you are mentally comfortable with and is about attitude and commitment to a physical challenge –whether polar exploration, cycling, mountaineering, backpacking or adventure racing. It is a philosophy as much as a technique and it is not new. Here are the 10 Lightweight Breakthroughs we identified for TRAIL in 2003. 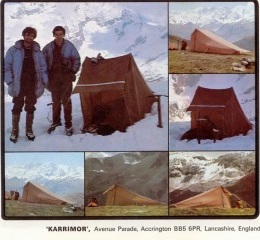 7    The launch of the KS-B –another Ledward –Parsons collaboration- in 1981 changed all mountain footwear.

It is remembered as the first fabric boot, but it was the first lightweight boot and had a sole that did not to ape the nailing patterns and the mid-sole design revolutionised all other boots.

9   Pile was invented in the 1940’s as literally imitation fur but there were few users initially.  In 1961, Helly Hansen pioneered the fibre pile pullover for North Atlantic fishermen, as a replacement for Norwegian oiled wool sweaters. This resulted in improvements in warmth/weight ratio over wool These became normal climbing wear through the 60s and 70s, but they looked awful. Many companies produced pile garments, especially in UK, including Javelin and North Cape, but they did not survive when the dramatic shift to fleece occurred.This resulted in improvements in warmth/weight ratio over wool but it looked awful. In came fleece in 1984 by Patagonia, followed by their supplier Malden who marketed Polartec in 1986.

10.  In 1995 Ray and Jenny Jardine hiked the Pacific Crest Trail in a record three months and four days. The packs weighed an average of 8.5 pounds, including clothing but excluding food of course. The pack itself weighed 430 gm but most important was the total commitment approach which mirrored many of the early pioneers..