In July 2001, the Mallory artefacts, recovered by the 1999 Mallory and Irvine Research Expedition, arrived at the National Mountaineering Exhibition. By this time our research, into the evolution of mountaineering clothing and equipment, was well advanced. The first sight of these fragments was deeply moving, but we recognised that scientific analysis would bring improved understanding of the performance of the clothing. The fragments were in too poor condition to be displayed, but they held many of the secrets of the 1924 clothing and helped us unravel the Mallory Myths. 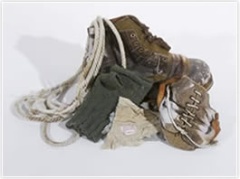 We felt that we owed it to the memory of the 1920s Everesters to look beyond the fragments and unlock the secrets of the clothing and certainly to see if our early views on 1920’s garments had any substance. Only then could we know how it would have performed and how it compared with the way modern climbers are equipped. Certainly it was different but was it inferior? Was it the best available at the time? Would anyone use equivalent gear today ? These were the questions that led us to the replication project which was a fitting tribute to those who ‘walked off the map’ in the quest for the summit of Mount Everest in the 1920s.

It took nearly 3 years of intensive scientific analysis (including scanning electron microscopy and microphotography, spectrometry, X ray spectroscopy) and detective work, to transform the rags brought back from Everest into testable replicas. This work involved teams from the 4 universities of Southampton, Derby, Leeds and Lancaster. The project was not just about a set of textile fragments or even a set of replicated clothes, but about understanding their position in the history of mountaineering and the wider innovation process. This unusual and collaborative project involved historians of innovation, textile conservators and replica makers, working alongside performance clothing specialists, textile and clothing manufacturers and mountaineers.

The complete set of garments was field tested on Everest, by Graham Hoyland, the great nephew of Howard Somervell, in April 2006. He confirmed that the replicated garments indeed formed a sophisticated, effective and comfortable clothing system which ‘was perfectly adequate for a summit bid’. Graham Hoyland , Everest, April 2006

We still do not know whether George Mallory and Sandy Irvine summited on Everest in 1924, but we do know that the clothing they wore did not prevent them. Members of the 1999 expedition concluded these men were stronger, fitter and faster than we are and they were also rather better equipped than popular myth suggests. But having unravelled the clothing myths we are still left with the tantalising question of whether they did summit on June 8th 1924. Their knowledge of acclimatisation and the affect of altitude were still developing, but their long walk in over the Tibetan plateau, at 3658- 4877 metres was an excellent preparation and their practice of climbing high and sleeping low is much in line with Griffith Pugh’s principles. Their upright posture may have helped breathing.

The difficulty of climbing the Second Step has always been seen as the major impediment to success and modern climbers believed was beyond Mallory and Irvine’s technical abilities. Conrad Anker reported on his unsuccessful attempt of free-climbing the Second Step on Everest’s Northeast Ridge and concluded it was graded at 5.10 (6+), “My inability to make the moves reinforces my belief that Mallory and Irvine were not able to surmount this formidable obstacle.”

But Everest historian, and author of Detectives on Everest : The 2001 Mallory and Irvine Expedition (2002), Jochen Hemmleb has generously supplied us with evidence which leaves a more open question. There have been two free climbs of the Second Step in 1985 and 2001, both of which graded the climb around 5.8 or below the standard Anker suggested. This makes it within the capabilities of Mallory and Irvine. Describing his experience in 2001 Austrian Theo Fritsche told Hemmleb:

“Right from the beginning I was certain that I wanted to climb Mount Everest without supplementary oxygen and without technical aids. … Below the cliff [of the Second Step] I formed a clear impression of how to climb it without aid. I put my ice axe in my pack, cached one of my ski poles, pulled down the hood of my anorak to get a wider field of view and took off the rather cumbersome over-mittens. … I saw to the left of the ladder a crack in the rock that offers the possibility to climb up (lay-backing). At the end of the crack is a steep rise, where I could hold myself on the left side and in the middle, then stepped up on its edge and pulled myself up (I went directly over the steep rise, bridging out left). I then mantled up to get my right foot on top of the block and to stand up – but it was very strenuous. … As for the rating, I would say 4+ to 5- [5.6-5.7], the top part somewhat technical.”

I leave it to the reader to decide if this has any bearing on the Mallory mystery.

The full story of the replication is told in:

The replicas are the property of Mountain Heritage Trust